Free Shipping On This Item

We have another conversion kit that includes the cable drums, spring hubs and track flag brackets here,  TORQUEMASTER PLUS CONVERSION KIT 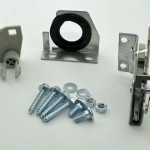